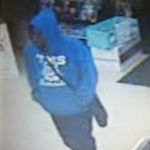 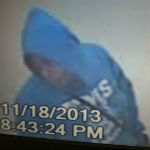 IREDELL COUNTY, N.C. —Deputies are trying to track down a woman who robbed two Statesville businesses with a large knife.

Investigators are concerned she could be dangerous.

Sheriff’s deputies said the woman was in and out of the businesses in just a couple of minutes.

Both times she went up to the check out counter to buy something but then pulled out an eight-inch knife.

The robberies happened inside the Dollar General and the Food Lion just east of Statesville.

The woman pulled a large knife from her sweatshirt, jabbed at the cashier and stole money out of the cash register at the Dollar General.

A grainy surveillance video shows that the sweatshirt had the letters TMS on it.  Investigators say the sweatshirt may be one from Troutman Middle School.

On Tuesday afternoon, police released two pictures of the woman inside the Food Lion.

Investigators say they are working with other law enforcement agencies to find out if they’ve had similar cases or can identify the woman.