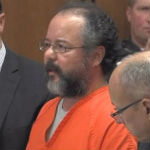 CLEVELAND, OH (AP) – The man convicted of holding three women captive in a house he turned into a prison and raping them repeatedly for a decade was sentenced Thursday to life without parole plus 1,000 years.

Ariel Castro, 53, apologized to his victims in a rambling, defiant statement before he was sentenced. He blamed a sex addiction, his former wife and even the FBI for not thoroughly investigating the abductions while claiming most of the sex was consensual and that the women were never tortured.

“These people are trying to paint me as a monster,” he said. “I’m not a monster. I’m sick.”

Just before the sentencing, one of three women he kidnapped stood within feet of Castro and told him his life was over.

“You took 11 years of my life away and I have got it back,” said Michelle Knight. “I spent 11 years in hell. Now your hell is just beginning.”

Knight, 32, was the first woman Castro abducted in 2002 after he lured her into his house with the promise of a puppy for her son. Relatives of the other two victims spoke on their behalf.

Judge Michael Russo dismissed Castro’s claims that the women lived a happy life with him.

“I’m not sure there’s anyone in America that would agree with you,” he said.

Castro pleaded guilty last week to 937 counts including aggravated murder, kidnapping, rape and assault. A deal struck with prosecutors Friday spared him from a possible death sentence for beating and starving a pregnant victim until she miscarried.

The judge told Castro that there was no place in the world for people who enslave others. “These women never gave up hope,” Russo said. “In fact, they prevailed.”

As Castro was led away, Knight watched, smiling.

Thursday’s hearing gave prosecutors a chance to detail some of Castro’s assaults and law enforcement a chance to describe the jury-rigged prison he built in his ramshackle home.

Bedroom windows were boarded shut from the inside with heavy closet doors and doorknobs had been removed and replaced with multiple locks, he said. The house was divided in ways to make it more secure and to hide the existence of rooms, he said.

Burke also testified that Castro would occasionally pay his victims after raping them. But he then would require them to pay him if they wanted something special from the store.

The letter written by Castro was found in his home and shown in court. It read “Confession and Details” at the top.

Cuyahoga County Sheriff’s Detective Dave Jacobs said he talked with Castro a few days after the women escaped and that Castro said, “I knew what I did was wrong.”

A police officer who helped rescue the women said one was reluctant to come out of her room even when she saw the officers. They were scared even after they were taken out of the house and quickly began sharing details about the horrors they went through, saying that they had been starved and beaten.

“They were just shouting out a lot of things,” said Cleveland police officer Barb Johnson. She described the women as thin, pale and scared.

Responding to questions from prosecutors, Cleveland police detective Andrew Harasimchuk said that the women all described a pattern of being physically, sexually and emotionally assaulted for years. He said all three women were abducted after Castro offered them a ride and that each was chained in his basement and sexually assaulted within a few hours of being kidnapped.

Prosecutors showed a model of the house where Castro imprisoned the women and displayed photos taken from inside the disheveled home.

Some horrific details of the women’s ordeal had already emerged, including tales of being chained to poles in the basement, to a bedroom heater or inside a van. One woman was forced to wear a motorcycle helmet while chained in the basement and, after she tried to escape, had a vacuum cord wrapped around her neck.

Castro repeatedly starved and beat one of the victims each time she was pregnant, forcing her to miscarry five times.

He forced the same woman on threat of death to safely deliver the child he fathered with another victim on Christmas Day 2006. The same day, prosecutors say, Castro raped the woman who helped deliver his daughter.

The women quickly escaped after Amanda Berry kicked out the door panel on May 6 and Castro was arrested within hours. The women disappeared separately between 2002 and 2004, when they were 14, 16 and 20 years old.

Berry, 27, made a surprise onstage appearance at a rap concert last weekend, and a second victim, Gina DeJesus, 23, has made a few televised comments. Knight appeared with Berry and DeJesus in a video in early July thanking the community for its support.