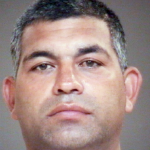 The incidents, which involved two juveniles, allegedly occurred in May and September of 2013 at a residence in western Lincoln County.

Both female victims were 13 years old.  The suspect knew the victims, according to Lincoln County Sheriff’s Office.

Moreno was arrested without incident and taken before a Lincoln County magistrate on Thursday.  He was placed in the Harven A. Crouse Detention Center under an $80,000 secured bond.