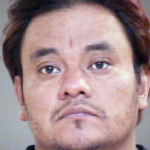 VALE, N.C. – A Lincoln County man has been arrested and charged with statutory rape.

The Lincoln County Sheriff’s Office arrested 32-year-old Jose Freddy Ambrosio-Gorgonio, of Vale, on Friday and charged him with three felony counts of statutory rape/sexual offense of a 13, 14, or 15-year-old by a defendant six years older.

The Sheriff’s Office began investigating Ambrosio-Gorgonio in mid-January after a report from the Department of Social Services.

Ambrosio-Gorgonio is accused of having sex with a 13-year-old girl, who’s not related to him, back in November.

Ambrosio-Gorgonio was also served warrants for misdemeanor driving while license revoked and improper use of a license plate on a vehicle.

He was booked in to the Lincoln County Detention Center under a $150,855 bond.