Lockdown Lifted; CPCC, Lake Norman Charter Given The All Clear 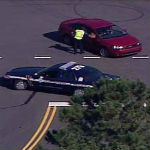 HUNTERSVILLE, N.C. — Huntersville police spent more than an hour searching the area surrounding a college campus after someone reported they saw two men with what appeared to be a gun.

The person reported seeing the men in the parking lot of Central Piedmont Community College’s Merancas Campus on Verhoeff Drive at about 10:30 a.m. Wednesday.

CPCC-Merancas was locked down for about an hour and a half. Police had all entrances to the campus blocked. An alert on the school’s website told students to suspend travel to the campus.

Lake Norman Charter School on Old Statesville Road was also locked down. Just before noon, school officials said they were given the all-clear to lift the lockdown.

Police left the scene at about noon.

Huntersville police said the car that the two men were in, a tan Dodge Stratus, drove off the campus, but they searched the area as a precaution. They said they did get the license plate number of the car and will continue to investigate.