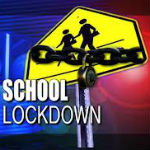 Three loud noises that were reported in the woods between Huntersville’s North Mecklenburg High School and Blythe Elementary has led to a lockdown placed on the high school at 6:40 a.m. Thursday, according to police Captain Scott Sharp.

A spokesman for Charlotte-Mecklenburg Schools said the report was first of shots fired in the woods, but was later a report of three loud noises.

Nothing was found by police in the woods to indicate the cause or source of the noises, Sharp said.