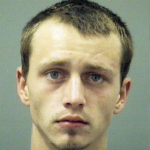 SALISBURY, N.C. — A Salisbury man is behind bars, accused in the accidental shooting death of his cousin.

Just after 11 p.m. on Monday, June, 9, Rowan County Sheriff’s Deputies were called to a possible shooting in the 5200 block of Woodleaf Road.

When officers arrived on scene, 23-year-old Roy Jacob Bryant was found suffering from a shotgun wound. He was taken to Rowan Regional Medical Center, where he succumbed to his injuries a short time later.

Investigators say Bryant and his 22-year-old cousin, Timothy Scott Glover, had been drinking liquor that night, and Glover had been in possession of a shotgun. Further investigation revealed Glover, who authorities say was intoxicated, was “carelessly” handling the shotgun when it discharged, firing a fatal blow into Bryant’s body.

Glover is charged with felony involuntary manslaughter and felony possession of a weapon of mass destruction.

Glover turned himself in. He was booked in to the Rowan County Jail under a $25,000 bond.