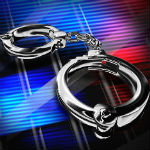 A man and a woman were arrested for robbing of a man on Dec. 20 in Union County.

The robbery happened in Indian Trail near the Crismark subdivision.

The two suspects had provided the victim of the robbery with a ride to the Crismark subdivision saying they were going to a party, the victim told investigators.

But after arriving to the area, one of the suspects pulled out a gun in the vehicle and ordered the victim to hand over their phone and money. Sheriff Eddie Cathey said the suspects had pistol-whipped the victim and abandoned them at the side of the road.

Both of the accused are to appear in court on Feb. 3.