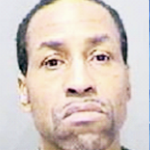 Charlotte-Mecklenburg police charged 56-year-old Michael Keith Hall with robbery with a dangerous weapon after he held up the First Citizen Bank on North Tryon Street on June 19th.

Police responded to the scene and broadcasted a description of the wanted suspect.  Officers observed Hall nearby who took off running.  A citizen flagged down officers and told them the suspect was hiding behind his residence on Hampton Way.

Police located and arrested  Hall who was then transported to police headquarters where he was charged and taken to the Mecklenburg County Jail.