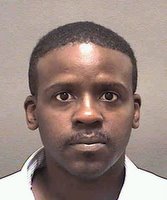 Henry Victor Thomas, II, 40, has been charged with Sherry Hampton’s murder by CMPD following an interview by Sheriff’s investigators. Police say Thomas had been identified as a potential suspect by CMPD earlier in the investigation.

Thomas was a co-worker of Sherry Hampton at Univar USA on Continental Blvd. in Charlotte. Investigators say they believe that the homicide occurred at Ms. Hampton’s residence on September 30th.

“Based on the excellent work by CMPD investigators on the missing person investigation, we were able to follow up on Thomas as a potential suspect in the case,” said Union County Chief Deputy Ben Bailey. “Thomas voluntarily came to the Union County Sheriff’s Office this evening at our request, and based on information revealed during the course of that interview, we were able to develop probable cause for the homicide, along with the date and time the crime occurred.”

Bailey praised the cooperation between the two agencies (Union County & CMPD) and the SBI. “This is a prime example of what can happen when everyone puts their pieces of the puzzle on the table,” he said. “Crime doesn’t recognize jurisdictional lines, and regional cooperation between law enforcement agencies is essential in today’s society,” Bailey said.

The Union County Sheriff’s Office would not comment on the details of the investigation. “As we have determined that the crime did not occur in our jurisdiction, it would not be proper for us to reveal information material to the CMPD case,” Bailey said. “All evidence collected by Sheriff’s
investigators will be released to CMPD for their investigation.”