Man Charged With Assault After Hitting Another With A Machete 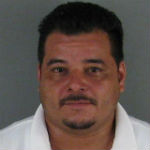 GASTONIA, N.C. – According to police, two Gastonia men got into a fight Sunday afternoon, ending with one of them bringing out a machete.

Rolando Escobar, 34, of Gastonia, was charged with assault with a deadly weapon.

Police allege Escobar hit a 37-year-old Gastonia man on the arm with the flat side of the machete.

Escobar was jailed on a secured $5,000 bond. His bond is currently on hold, pending an immigration investigation.