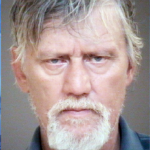 LINCOLNTON, N.C. – Authorities in Lincoln County say a man sexually assaulted the child of a family who was helping him through hard times.

Wednesday afternoon, Lincoln County Sheriff’s Deputies were dispatched to a residence in the 100 block of Springs East Road in Lincolnton for a reported sexual assault of a minor child.

Deputies found Rudisill walking down the roadway nearby, detained him, and transported him to the Sheriff’s Office for questioning.

During the interview, the Sheriff’s Office says, Rudisill confessed to the crime.

Investigators say the family had been giving Rudisill a place to stay, and was trying to help through hard times.

Rudisill is charged with one felony count of first-degree sexual offense of a victim under 13-years-old. He was booked in to the Harven A. Crouse Detention Center under a $75,000 bond.