Man Crashed Mini-Van Into House Then Fled The Scene 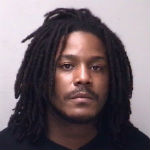 SALISBURY, NC -The driver of a minivan is wanted by police after they say he ran off the road and crashed into a house and then ran from the scene.

The incident was reported around 5:50 a.m. on Statesville Boulevard in west Salisbury, according to the Salisbury Police Department.

A spokesman for the police department said that the minivan, being driven by 23-year-old Demarcus Jefferies, ran off the right side of the roadway after he over corrected heading west.

Jefferies hit a power pole guide wire, took out some trees in a front yard, clipped a parked van and slammed into a house.

No one inside the home was injured.

A passenger in the SUV was taken to the hospital for treatment.

Jefferies, who police said has a criminal record, ran from the scene.

Warrants were obtained on him for careless and reckless driving, no operator’s license, fictitious tag, no insurance and leaving the scene of an accident.