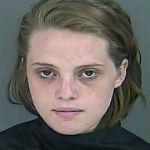 ANDERSON COUNTY, S.C. (Fox News) -A South Carolina man died after police say he asked one of his friends to fire a gun into a bulletproof vest he was wearing and they missed.

The bullet hit Blake Randall Wardell, 25, in the chest. Friends were performing CPR when police arrived, but Wardell bled to death in the garage. The death was classified a homicide. The bulletproof vest was about 10 years old and the weapon was called a small-caliber gun.

Taylor Ann Kelly, 18, was charged with involuntary manslaughter in connection with the shooting.

Police say that Wardell put on the vest and asked Kelly to shoot him. When she did, the bullet passed through the top edge of the vest carrier but missed the vest. Wardell and Kelly knew each other as friends.

The investigation is still on-going but Kelly has been charged and is being held at the Anderson County Detention Center. Bond has not been set.