Man Draws A Heart With His Victim’s Blood 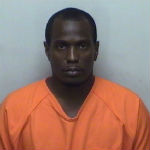 SALISBURY, N.C. – Police in Salisbury are investigating after they say a man confessed to fatally stabbing his girlfriend and using her blood to draw a heart on a building.

According to police, a man walked into the Rowan County Magistrate’s Office around 6:25 pm Thursday night and told officials he had just stabbed his girlfriend inside an apartment.

But police say before going inside he used the woman’s blood to draw a heart with initials in it on the side of the building.

Officers went to an apartment on the 300 block of Calhoun Street, near the intersection of MLK, where they found the body of 28-year-old Tasha Nicole West with an apparent stab wound.

Police say the apartment is now enclosed by crime scene tape as the investigation continues.

The man, later identified as 40-year-old Tony Lamont Luther, was taken into custody at the magistrate’s office.

He was charged with Murder and placed in the Rowan County Detention Center under no bond.

His first appearance was set for Friday.