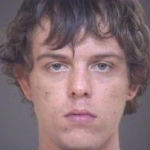 LINCOLN COUNTY, N.C. — Lincoln County Sheriff’s deputies said a man was arrested and charged with cruelty to animals after he was found choking a Chihuahua.

Officers said they were called to a home in Maiden for a domestic disturbance.

When they arrived, officers said Jason Tyler Hilderbran, 18, was holding his mother’s Chihuahua and choking it. Deputies said Hilderbran was choking the dog because it was barking at him. His mother was trying to get the dog.

The dog was not injured. Hilderbran was charged with one count of cruelty to animals. He was released on a $1,000 secured bond.