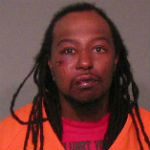 YORK, S.C. – A South Carolina police officer is recovering after he was pinned between his cruiser and another vehicle while responding to a call for shots fired.

According to the York Police Department, officers were called to a robbery at the Forest Brook Apartments around 5:30 a.m. Friday morning.

A woman who lives in the apartment says she went to her car when she was jumped by three men and dragged back into her apartment.

Once inside, they reportedly beat up a man inside and demanded money and drugs. They were able to get money from the home.

According to police, at some point a person jumped out of the second story window and shots were fired from the window towards a neighboring apartment.

That’s when officers were called to the scene.

When they got there, investigators say officers jumped out of the cruisers to stop a vehicle that was leaving the scene with no headlights on.

As the officer on the driver’s side got out, the patrol car was struck by the other vehicle. The officer was pinned between the car door and vehicle, injuring the officer’s leg.

The officer fired at the vehicle which pulled out of the complex past another patrol vehicle.

The driver threw a gun out of the window of the car and into the roadway which was later recovered by officers.

The second officer was able to stop the vehicle along California and Congress streets.

The driver, 30-year-old Rodney Lamar Howell, was reportedly the man that was beaten in the apartment.

He was victim from the incident described below, but was later taken into custody for attempted murder of the officer he injured.

Howell was also charged with drug related charges including selling a controlled substance near a school.