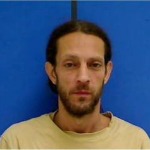 HICKORY, N.C. – A Hickory man has been charged with attempted first degree murder after Catawba County officials said he shot another man in the face over an ongoing land dispute.

Johnny Franklin Lipps III, 38, was arrested early Thursday morning after the Catawba County Sheriff’s Office said he fired several shots at a man who has an ongoing land dispute with Lipps.

The victim and a friend were hunting on land off 39th Ave N.E. around 5:30 p.m. Wednesday when they said Lipps began walking towards them, officials said.

They saw him fire three or four shots in their direction, according to the sheriff’s office, noting the victim and his friend asked Lipps not to shoot them when he was within 20 feet.

Lipps fired another shot and the victim was struck in the face, officials said. The victim and his friend returned to the victim’s home and contacted the sheriff’s office.

The victim is in stable condition after being taken to Baptist Hospital, the sheriff’s office said.

Lipps is being held at the Catawba County Detention Center under $500,000 bond and is scheduled to appear in court Monday.