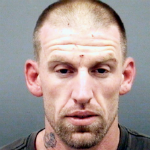 KANNAPOLIS, N.C. – A two-month investigation led to the arrest of a man for multiple methamphetamine charges across two counties.

The Richmond County Sheriff’s Office began investigating Jessie Don Woodhull in early August, when deputies say his mobile methamphetamine lab caught fire. Woodhull suffered burns in the fire and was treated in a local burn unit. Doctors discharged him before any warrants were issued.

Woodhull then sold methamphetamine to officers in an undercover operation, according to police. Police attempted to arrest him following that incident on Sept. 25, but he escaped on foot.

Investigators caught up to Woodhull on Tuesday at a truck stop in Kannapolis and took him into custody.

He now faces several charges in both Richmond and Rowan counties, including manufacturing and possession of methamphetamine.

Police booked Woodhull into the Rowan Count Detention Center under a $200,000 secured bond, as well as a $200,000 bond for Richmond County.