Man Facing Slew Of Charges After Shooting At His Wife 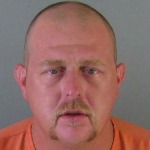 KINGS MOUNTAIN, N.C. – A Gaston County man fired gun shots at his wife in an attempt to kill her, according to Gaston County Police.

Michael David Clinton, 33, of 1709 Martin Road, Kings Mountain, was booked into Gaston County Jail on Sunday under no bond on an attempted murder charge.

When police went to arrest him just after 6:30 p.m. Sunday, a shirtless Clinton greeted them at the front door of his home while holding a gun, said Gaston County Police Sgt. Chris Reynolds.

“The subject yelled at the officers that they had better move on,” Reynolds said.

He then went back into the home refusing to come out. Police called in the department’s Emergency Response Team, but before additional officers could arrive Clinton ran out the back door and was captured in a wooded area behind the home, Reynolds said. The standoff lasted about 30 minutes.

Clinton told officers he had been drinking alcohol much of the day, according to police.

Before officers arrived Clinton had fired several shots at his wife, Jessica, as she drove away from their residence in a Jeep Liberty, according to police.

Clinton had earlier shot the tire out of a PT Cruiser.

“Michael Clinton is married to Jessica Clinton. Today he grabbed her by the hair, knocked her down, threw a coffee table at her, striking her in the leg,” according to a warrant affidavit written out Sunday by Gaston County Police Officer J.E. Hamrick. “Michael then got a rifle and told her, ‘B—-, you’re going to die tonight.’”

After Michael Clinton shot the tire out of the PT Cruiser, Jessica Clinton grabbed keys to a Jeep Liberty and ran out of the house, according to police.

“As she pulled out, Michael fired a shot, hitting the rear tire of the vehicle,” Hamrick wrote in the affidavit. “Jessica said he continued to fire 2-3 more shots at her as she drove away.”

“He’s threatening to shoot everybody,” Jessica Clinton tells the 911 operator.

In addition to the attempted murder charge, Michael Clinton also faces charges of assault on a female, shooting a weapon into a moving vehicle, resisting a public officer and injury to personal property.

The property related charge comes from Michael Clinton breaking some Gaston Emergency Medical Services equipment valued at more than $200, according to a warrant.