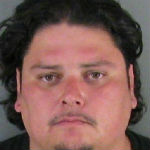 GASTONIA, N.C. – A patron at Leather and Lace fired more than a dozen shots at the Gastonia strip club after being asked to leave because he had reached his hands into a dancer’s underwear, according to arrest warrants.

One of the bullets crossed two pool tables before being lodged into a sofa.

Mario Chavez was booked into Gaston County Jail under a $1 million bond early Friday morning. The alleged incident occurred around 11 p.m. Thursday at the club located at 512 W. Main Ave.

Chavez, 33, of 300 E. Charlotte Ave., Mount Holly, reached his hands into the underwear of a 24-year-old woman at the club and then hit her on the hip, according to the arrest warrant. People at the strip club asked him to leave. But after Chavez left the building he went to his 2004 Chevrolet pickup truck and took out a .40-caliber Beretta handgun and fired four shots into the building. He continued to fire until the Beretta either jammed or ran out of ammunition, according to warrants.

Chavez then walked back to the truck and got a 9 mm Taurus handgun and fired seven more shots at the building. He fired two more shots as he drove away, according to warrants. There were two people standing outside the club while Chavez shot at it and another 18 people inside.

“The building was struck six times by the projectiles, one being at waist level and crossed two pool tables before being lodged into a sofa,” stated the warrant affidavit.

Chavez faces a charge of sexual battery, discharging a weapon into occupied property, and 18 counts of assault with a deadly weapon with intent to kill.