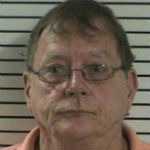 STATESVILLE, N.C. – A Statesville man has been arrested after he’s accused of forcing two underage children to watch pornography with him.

According to the Iredell County Sheriff’s Office, 67-year-old Larry Terry Rudisill was arrested at his home on Wednesday.

The arrest stems from alleged incidents that happened back in 2007. The victims were under the age of 13 at the time.

Deputies say a victim came forward last month to report the incidents.  The victim told investigators that they were sexually assaulted.

The victim “also stated how on several occasions, another child, as well as the victim were asked by the suspect to watch pornography together,” according to the deputy.

The second victim named in the case was interviewed by investigators and described being forced to watch pornography “on numerous occasions” with Rudisill and the other child.

Rudisill was arrested on eight counts of Indecent Liberties with a child, eight counts of disseminate obscenity to a minor under 13 years of age and one count of 1st degree sex offense.

He is being held at the Iredell County Detention Center under $1,000,000