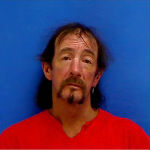 HICKORY, N.C. – Hickory Police are investigating a stabbing after finding a man dead at a carwash.

Police arrested Roger Frenceschini, 53, he’s been charged with murder and is being held  in the Catawba County jail.