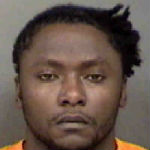 CHARLOTTE, N.C. — Police have charged a man with murder in the death of another man found inside a car late Monday.

Crime in Charlotte .com reported earlier that homicide detectives were called to Snow Lane in east Charlotte just after 9 p.m. last night.  Someone found a man unconscious in the parking lot of an apartment complex.

Police said there were no visible wounds. Detectives said they interviewed Keith Tyron Henderson, 33, and learned that Stokes was injured when the two fought on The Plaza.

Henderson was charged with murder and taken to the Mecklenburg County Jail.