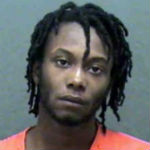 CHARLOTTE, N.C. – A man has been sentenced to at least 47 years in prison for sexually assaulting and robbing a Charlotte woman twice within a two-year period.

The first incident occurred in April 2010 when, officials say, 23-year-old Daven Lorenzo Teeter forced his way into a woman’s home at knifepoint and “bound her arms and legs, covered her mouth and attempted to sexually assault her.”

Teeter then took cash and jewelry and left the home.

Officials say two children were in the home during that first incident.

Then, in October 2011, Teeter went to the same home, pried open a hole in the roof, and rappelled inside.

Once in the home, he raped the woman while threatening her with a knife.

Teeter then put the woman in the trunk of her own car, put her daughter, who was home during the incident, in the car with him, and drove to a local bank. At the bank, he held the daughter out of the car and told her to enter her mother’s identification number at an ATM before abandoning the vehicle and the victims.

Surveillance video captured at the ATM led to Teeter’s arrest, and police used DNA collected from both incidents to match him to both cases.

He was sentenced to serve between 47 and 60 years in prison. Upon his release, he will also have to register as a sex offender and be on satellite-based monitoring for the rest of his life.