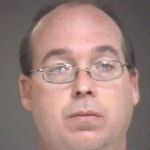 LINCOLNTON, N.C. – A man accused of slapping his teenage daughter across the face has been charged with child abuse.

Police were alerted Thursday when a woman brought her 13-year-old daughter to CaroMont Regional Medical Center in Gastonia.

The woman told police that the girl’s father had assaulted her.

According to police, Charles Edward Earnhardt Jr. was arguing with the girl because she was not making tea fast enough.

Earnhardt reportedly threw some things across the room and broke some glasses.

When the teen refused to clean up the mess, Earnhardt allegedly slapped her across the face.

Earnhardt, 38, of 5201 Flay Road, Lincolnton, was charged with felony child abuse and served with an outstanding warrant for trespassing. He was released on a $10,000 secured bond.