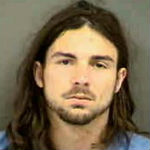 CHARLOTTE, N.C. — A man is in jail accused of leaving a baby alone outside of a Charlotte bar Tuesday night.

Officers arrested Casey Malet, who faces several charges on Tuesday night, including neglect of a juvenile.

The police report said the child was not hurt and that Malet and the baby are related.

Malet is in jail on three charges. Besides the neglect charge, there is also a charge of drug paraphernalia and defrauding an innkeeper.