Man Responds “No, It’s OK” When Asked To Put On Pants 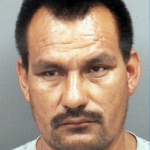 SALISBURY, N.C. – A man, naked from the waist down, was arrested Saturday morning in Rowan County.

Early Saturday morning, Rowan County Sheriff’s Deputies responded to the area of Mt. Hope Church Road and Safrit Road to check on reports of a half-naked man walking along the side of the road.

The officer pulled up and shined his lights on the man, stating he was standing there, naked from the waist down, holding his pants in his hands.

Then, the man told the deputy he did not have an ID on him, but could write his name down. He then identified himself as Efren Sanchez.

Sanchez then told the officer he was on his way home, just three minutes away.

Sanchez was arrested for indecent exposure and booked in to the Rowan County Detention Center under a $500 bond.

Authorities say Sanchez was uncooperative when trying to obtain his social security number and contact information for his nearest relative.