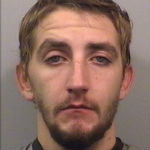 KANNAPOLIS, N.C. — Officer arrested a man in connection with an armed robbery Saturday at a convenience store in Kannapolis, according to the Kannapolis Police Department.

The clerk at the Lane Street Express Food Mart reported at 9:30 p.m. a man armed with a knife took an undisclosed amount of money from the cash register and left the business.

Officer searched the area and said they identified the robber as Johnathan Bo Bullington.

Bullington was arrested and charged robbery with a dangerous weapon. He was taken to the Cabarrus County Magistrates Office and given a $200,000 secured bond.