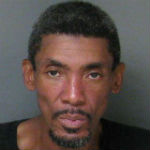 GASTONIA, N.C. – Police arrested a man for robbing the Walmart on E. Franklin Blvd. in Gastonia.  Police also allege he fought with a Walmart employee.

According to police records, Charlotte man Reginald Benton Reid, 53, attempted to steal some men’s clothes and a couple of watches Monday. Altogether the items were valued around $130.

When approached by an employee, Reid assaulted him.

Reid had been banned twice before from the store.

Reid was charged with robbery and trespassing. He was arrested and booked into the Gaston County jail on a $30,000 secured bond.