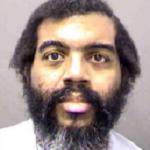 McDougald was sentenced to 276-341 months in prison. Upon his release from prison, he will be required to register as a sex offender and participate in satellite-based monitoring for the rest of his life.