DA’s Office: Man Sentenced to Life in Prison for 2007 Murder 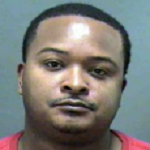 Crowder was tried for first-degree murder. After deliberating for less than two hours, the jury returned a verdict of guilty as charged.

Judge Edwards sentenced Crowder to life in prison without the possibility of parole.

In March 2007, Mr. Wood was fatally shot in a drug-related incident as he sat in his vehicle on Greenview Place in Charlotte. Cell phone records led police to Crowder, who was charged in 2010.