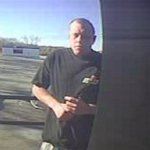 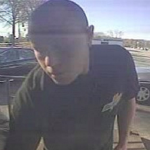 STATESVILLE, N.C. – Authorities in Statesville are hoping to identify a suspect who stole money from a woman who was visiting an ATM in a mall parking lot.

On the afternoon of Sunday, November 24, Statesville Police say a white male approached a woman using the ATM in the parking lot of the Signal Hill Mall, stood beside her and asked how she was doing.

As soon as the currency began dispensing from the machine, police say the suspect snatched it and fled to a nearby car.

The suspect is described as a white male, possibly in his 20s, standing 5-foot-5, weighing about 160 pounds with a slender build, black Gatorade t-shirt and jeans.

Officials say the suspect fled in a vehicle described as possibly being a light green or light blue Ford Mustang. The suspect fled northbound on Signal Hill Drive toward Simonton Road.