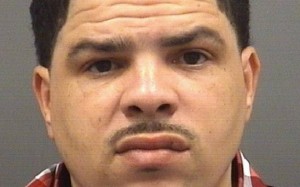 A man accused of punching a Rowan County sheriff’s deputy fled on a golf cart taken from another golfer at a course this week.

Investigators said Erwin ignored a sheriff’s deputy’s lights before punching him on the right side of his face several times before the deputy fired a Taser at him.

Crack cocaine and drug paraphernalia were also found in the car and a 9mm handgun stolen from Lexington in April was found outside the driver’s side door, the sheriff’s office said.