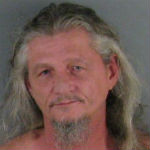 KINGS MOUNTAIN, N.C. – A man threatened to rape two women and later that night broke into their home, according to police.

Neal Richard Meadows, 50, of 1006 Second St., Kings Mountain was booked into the Gaston County Jail under a $250,000 bond on charges of first-degree burglary and communicating threats.

Police say Meadows used a telephone to call a 61-year-old woman between 11 p.m. and midnight Friday and told her he was going to rape her and a 54-year-old woman who lives with her.

Police say a little later he went to the women’s home in the Gaston County portion of Kings Mountain and crawled in a bedroom window. The two women hid in the corner of the bedroom with a golf club.

“They advised they were petrified of Mr. Meadows,” Gaston County Police Officer I.M. Martin wrote in a warrant affidavit. Meadows was found inside the home when police arrived, according to the warrant affidavit.