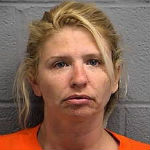 WESTMINSTER, Md. — Westminster police have charged a woman with human trafficking and sex offenses against a 15-year-old North Carolina girl.

The Carroll County Times reports that 38-year-old Mishelle Lee Wareheim of Westminster was arrested Tuesday.  She was charged with human trafficking, sexual abuse and sexual solicitation of a minor.

According to charging documents, Wareheim persuaded the girl, who has been living with her, to record her in a pornographic film and take part in it.