“Missing Person” Has Turned Herself Into CMPD 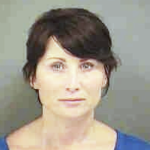 CHARLOTTE, NC – A Gastonia woman who staged her disappearance in North Myrtle Beach turned herself in to Charlotte authorities on Wednesday night.

Amy Arrington is in custody at the Mecklenburg County Sheriff Office, according to police. She was booked under the name of Amy Lynette Robinson. She is due in court Friday morning.

Officials determined that she and her husband, Paul David Arrington, conspired for her to disappear to avoid having to show up in court in North Carolina to answer to charges filed against her.

On Tuesday, authorities said they stopped all active ocean and beach searches for Arrington.

Instead, police shifted their focus and considered Arrington a missing person on Tuesday afternoon before determining she had intentionally disappeared.

Arrington was due in a Mecklenburg County courtroom Monday on identity theft charges. A judge issued a warrant for her arrest when she didn’t appear.

Charges for filing a false police report are pending in North Myrtle Beach against Paul Arrington.

North Myrtle Beach officials are tallying the cost of the multi-agency search for Arrington over the weekend, and reserve the right to seek repayment from the couple.  They say the couple’s actions put others at risk.