Mom Charged When Child Shot Herself With Loaded Gun 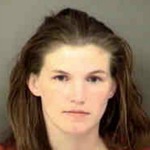 CHARLOTTE, N.C. — A Charlotte mom is facing charges after her young daughter shot herself Saturday afternoon.

Responding officers spoke with the 7-year-old girl’s mother, Heather Nicole Davenport, 27, who reported she was asleep when her children, ages 5 and 7, found a loaded firearm in her Bank Street home.

The 7-year-old girl accidentally shot herself while handling the firearm, but sustained non-life threatening injuries.

Davenport is charged with failure to properly secure a weapon.

Police say DSS, CPS and CD-CP was notified of the incident.