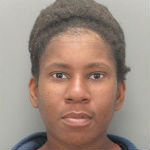 GREENVILLE, S.C. (AP) — A Greenville woman has been charged with attempted murder and child neglect after an infant boy was found in a trash can on a city street.

Police spokesman Johnathan Bragg said officers were called to a street around 4:30 p.m. Monday where a baby was found in a trash can. Bragg said the owner of a rental home was doing maintenance when he noticed blood outside the trash can.

Officers found the newborn in a plastic grocery bag wrapped in a blanket in the trashcan.

Bragg says the baby was taken to a hospital where he was in stable condition.

Twenty-nine-year-old Sharon Lenise Ferguson was arrested in the investigation. It was not clear if she has an attorney.