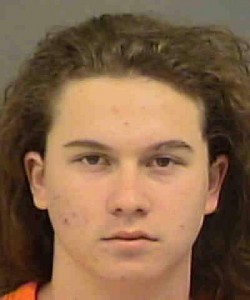 The teenager who is charged for shooting and attempting to kill a Cornelius police officer over the weekend was in court Tuesday for his bond hearing.

At least four members of the family of Greyson Ferrell, 16, were also at the hearing, including his mother, sister, and sister’s husband.

Ferrell had been getting ready for prom on Saturday when he and his brother-in-law got into a big argument which led to police being called.

When officers responded to the scene, Ferrell came out of his bedroom wearing a bulletproof vest and holding a shotgun, according to Bruce Lillie, Mecklenburg prosecutor.

Ferrell then shot the gun at Police Lt. James Quattlebaum, Lillie said. Quattlebaum was shot in the stomach.

Lillie believes the attack was deliberate and that Ferrell poses a danger to both himself and other people, he said, asking for bond of $2 million for the teen.

Ferrell also showed lack of any remorse for his crime, according to Lillie, who said the teen was singing “I shot the sheriff” while in custody.

According to Ferrell’s attorney, the proposed bond is inconsistent with other cases and that Ferrell was not out hunting for police officers to shoot.

The bulletproof vest Ferrell was wearing had been bought for him by his mother, Theresa Ferrell, and used for a Halloween costume as a “Call of Duty” video game character.

Ferrell’s bond was ultimately set at $1 million. The judge voice his concern about who Ferrell would be staying with as he could be dangerous for his family.

If Ferrell is able to post bond, he’ll be required to put on an ankle monitor.