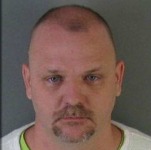 Police say Clemmer had four videos on his computer that depicted girls between the ages of 4 and 13 engaged in sexual acts with adult men. The videos ranged in length from 25 minutes to more than an hour, according to arrest warrants.

The Internet Crimes Against Children Task Force will try to identify the children and the adult men seen in the video, said Mount Holly Police Chief Don Roper.

Police also found a .38-caliber Smith and Wesson handgun that had been reported stolen earlier this year.