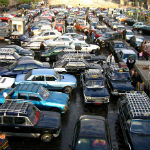 Charlotte Mecklenburg police received a call about a two women walking along the 6000 block of Providence Road on Saturday afternoon.  A toddler was walking along side them and one of the women was carrying a small baby in her arms.  All four of them were naked.

“Like freshly-born baby naked,” Charlotte Mecklenburg Police Capt. Rod Farley said. “This was Adam and Eve stuff, not even a loincloth.”

When police stopped to question the women, they said “The Lord told them to get naked and walk down the street,” Capt. Farley said.

All four of them were transported to Presbyterian Matthews, where they were physically – and mentally – evaluated.

Capt. Farley said, “It didn’t appear that they had any problems short of that they didn’t have any clothes on”.

Police filled out a child neglect report and contacted the Department of Social Services, the police captain added.

It’s still unclear whether the children remained in the custody of the DSS or if any additional charges were filed.