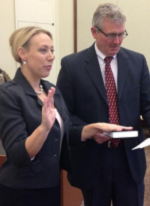 Ms. Comerford was sworn in as an Assistant District Attorney for the state’s 26th Prosecutorial District (Mecklenburg County) on November 30, 2012. She is a member of Mr. Murray’s staff, but she will be assigned to the U.S. Attorney’s Office for the Western District of North Carolina as a SAUSA for Mecklenburg County, a position previously held by Beth Greene.

In her role as a SAUSA, Ms. Comerford will serve as a dually-sworn state/federal prosecutor and liaison between the District Attorney’s Office and the U.S. Attorney’s Office by identifying cases that should be indicted and prosecuted at the federal level. She’ll consult local and state authorities, as well as state prosecutors, and then prosecute those cases in federal court.

State and federal authorities share concurrent jurisdiction over many drug and violent crimes, which allows for prosecution in either state or federal court. The SAUSA position is a partnership between the District Attorney’s Office and the U.S. Attorney’s Office that ensures the best choice of venue for prosecution is made to effectively and vigorously prosecute violent criminals, ultimately helping to make Mecklenburg County become a safer place for its residents.

Ms. Comerford will bring vast experience to her new role, having previously worked as a SAUSA for Iredell and Alexander Counties.

The SAUSA position is funded through a grant requested by the Mecklenburg County District Attorney’s Office from the Governor’s Crime Commission (GCC). The GCC – whose members include representatives from the courts, law enforcement, local government, the General Assembly and private citizens – acts as an advisory body on crime and justice issues to the Governor and the Secretary of the Department of Crime Control and Public Safety. The GCC makes recommendations to the Governor for the state’s criminal justice and juvenile justice federal block grants, which are awarded annually to government, education and social agencies to launch innovative programs.