No Injuries In Gastonia Driveby Shooting 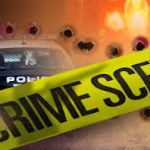 The 25-year-old Gastonia woman was at home with two other people when she heard the gunshots and saw a car driving by the house.

No one was injured but there was damage done to the house. According to police reports, bullet holes were found in the front porch post, front door frame and in the living room ceiling.

The case is under investigation. Anyone with any information is asked to call Gaston County CrimeStoppers at 704-861-8000.