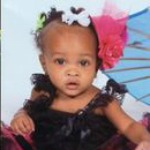 The police reports that the girl was hit twice in the arm and leg during a shooting on Capps Hollow Drive around 9:30 p.m.

Several shots were fired at homes in the neighborhood before the suspect took off, police said.

The 2-year-old girl was taken to an area hospital and is listed in stable condition.

Police are still working to gather more information on the shooting, and have not released any description of the suspect or a motive to the shooting.