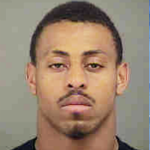 CHARLOTTE, N.C. –A Carolina Panthers player has been arrested on domestic violence charges.

Charlotte-Mecklenburg Police that Greg Hardy, a defensive end with the Carolina Panthers, was arrested on a domestic violence charge.

According to police, officers responded to a domestic violence assault call for service in the 100 block of North Tryon Street around 4:18 a.m. Tuesday.

Police say the victim told officers that Hardy physically assaulted and threatened her. She said she’s been dating Hardy since September 2013.

Hardy turned himself in for charges of assault on a female and communicating threats.

Hardy is currently held on no bond.

The Panthers have released a short statement saying:

“We are very disappointed to learn of the allegations involving Greg and are concerned for all parties as we continue to investigate.”

Hardy was selected in the sixth round, 175th overall, of the 2010 NFL Draft by the Carolina Panthers.