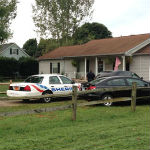 Two deputies showed up at the Miller Chapel Road home around 9:15 a.m. and briefly spoke with Sandy Parsons before giving him civil papers for a Juvenile Summons from the Rowan County Department of Social Services.

Deputies said they will serve Casey Parsons with the same papers once she returns home from the hospital.

Deputies would not release anymore details on the summons.

The search for Erica Parsons led investigators to the family home in Salisbury for hours Wednesday. They’re hoping it will lead to clues about 15-year-old Erica Parsons’ whereabouts.

Investigators from the Rowan County Sheriff’s Office, State Bureau of Investigation and FBI swarmed the house on Miller Chapel Road Wednesday morning and spent the day there.

A warrant released on Thursday revealed some surprising findings, including several red stains that are now being tested for blood. The stains were found on walls, on baseboards and the floor. Investigators took several swab samples.

In addition, they found an apparent fascination with the 1996 murder of JonBenet Ramsey in Boulder, Colorado, which remains unsolved to this day.

The warrant says notes about home remodeling were in the Ramsey book.  They also found a plastic bag of magazines featuring JonBenet.

Investigators took the evidence in their attempt to find 15-year-old Erica Parsons.  She has been missing from the family home for nearly two years.  Her brother reported her missing two weeks ago, prompting the search.

The family says the brother accused them of crimes they didn’t commit as payback for the brother getting kicked out of the house in June after a fight with his mother Casey Parsons.