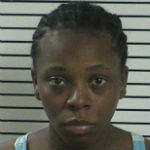 STATESVILLE, N.C. — The parents of a 4-week-old child that died after being left in a hot car are now facing charges, according to the Statesville Police Department.

The family returned to its home around 2 p.m. on July 27, according to police. Officials said the parents did not remove the infant from the car and two hours later, the infant was discovered by his aunt.

The aunt and the child’s mother, Sherrie Clay, took the child to Iredell Memorial Hospital. Statesville Police Department and Iredell County of Social Services were notified at the time. The child died the next day.

On Monday, the Statesville Police Department determined the child died from hyperthermia.

Clay and  Robinson were charged with involuntary manslaughter and felony child abuse. The maximum sentence is 263 months — or just under 22 years.

They each received a $200,000 secured bond and are being held in the Iredell County Jail.

The next court appearance for the parents will be Aug. 26.