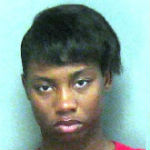 FLORENCE, S.C. — A Florence woman has been arrested after police say she sent a questionable photograph of her daughter to family and friends.

The Morning News of Florence reported that 18-year-old Phoenix C. Jones is charged with illegal conduct toward a child.

Police Maj. Carlos Raines with the Florence Police Department says Ms. Jones was arrested after an investigation of a photo she sent to friends and family members. The photo shows Jones’ 2-year-old child in a diaper, with her wrists and ankles bound with packaging tape and her mouth covered with tape.

Raines says a message with the photo said the girl was packaged up and asked if there were any takers?

An acquaintance who is a foster parent saw the picture and reported it.

It was not clear if Jones has an attorney.