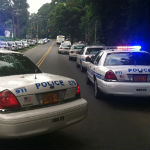 Police who were attacked by two pit bulls Tuesday at a homeless camp uptown shot and killed one dog and shocked the other.

Charlotte-Mecklenburg police said the officers were at the camp to assist paramedics responding to a call regarding an unconscious person. The homeless camp is near South Graham and South Mint streets.

Police arrived to see the unconscious person lying on the ground and the two pit bulls. Police said while the patient was receiving aid from first responders, one of the dogs attacked an officer. The attacked officer shot and struck the dog.

Police said the second pit bull bit its owner who was holding it back, then attacked the officer and bit him on his forearm. Another officer attempted to take control of the dog by tasering him, police said.

The first patient was taken to Novant Health Presbyterian hospital for treatment. The bitten dog owner and officer were taken to the same place for wound treatment, police said.

An internal affairs investigation is being conducted, which is routine for when any officer shoots a weapon.

The tasered pit ball was taken control of by animal control officers, who also collected the body of the dog who was shot and killed.